We show how to segment and plan an operation of femoral osteotomy with Rhino3DMedical. The workflow was prepared by Valeria Palacio Manco, industrial designer at Rhino3DColombia, and used to plan a case by Dr Camilo Andrés Hernández Gallego at Antioquia University Hospital in Medellín, Colombia.

We briefly note the necessary steps to segment, analyze and extract the 3D model of the femur with the planned cut.

Run command RMImageAnalysis (button Image Analysis). With the controls navigate through the image and set a threshold to show the femoral bone in green color. Click Surface Preview to see a 3D preview of the segmented area and click Close to close the window. 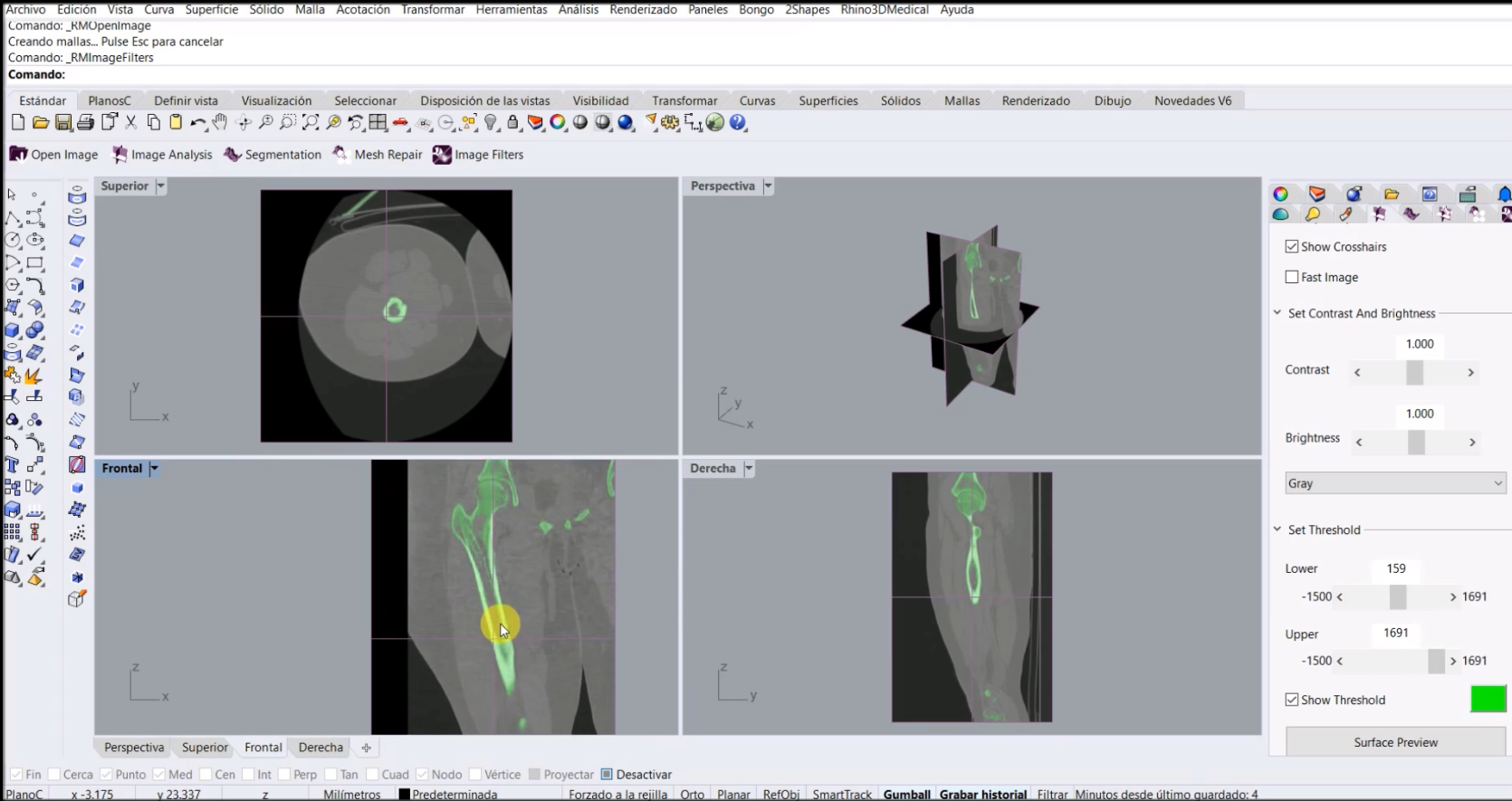 Run command Joint Separation (RMJointSeparation, located at top menu Rhino3DMedical, Modules tab). This command lets the user split the mask at a certain area, following a half-spherical surface. This is specially useful to separate the femoral head from the pelvis and isolate the femur. Follow the instructions in the command line to successfully perform this step. 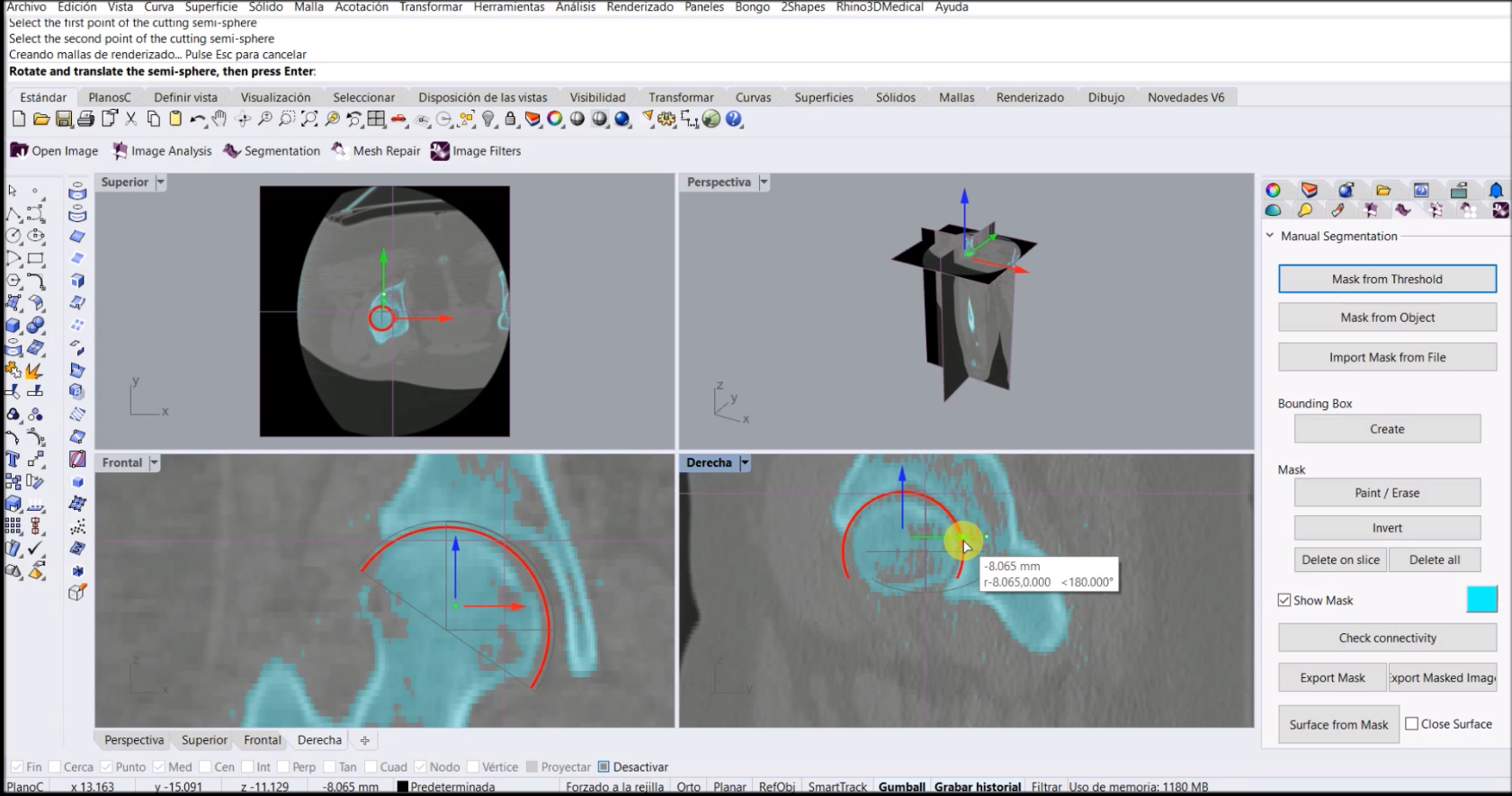 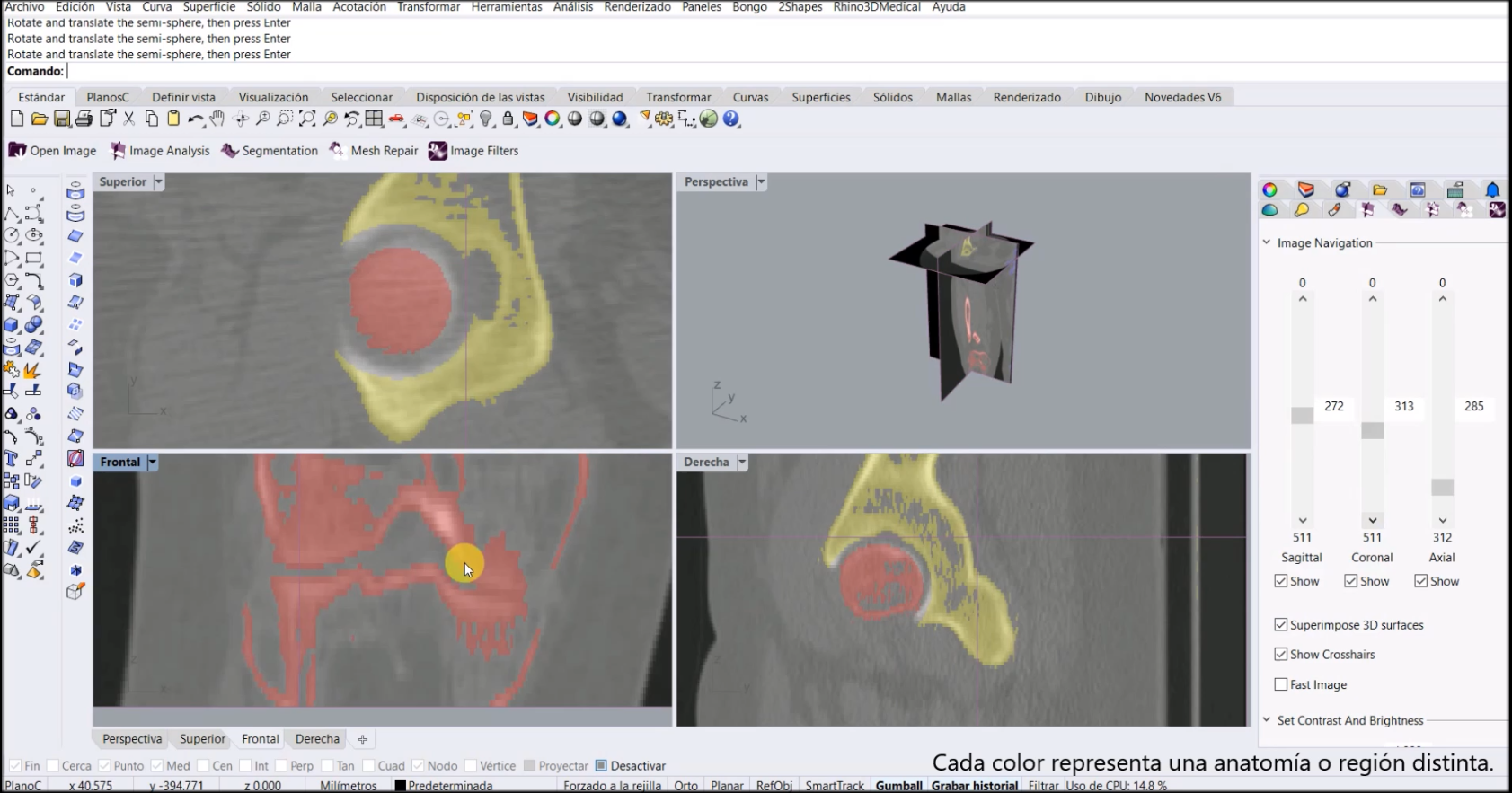 3. Meshing and planning the cut

Go to Segmentation tab (command RMSegmentation). Refine the region to be extracted using button Select Region and picking a point inside the femur mask. Extract the mesh of the femur via Surface from Mask (checking Close Surface checkbox to have it closed).

Now, let’s extract an additional part of the femur by planning the cut of the osteotomy. In Segmentation tab, create a bounding box around the part to be split (button Create below Bounding Box). Rotate it using the gumball arrows (display the gumball with command Gumball, On option), by double-clicking on one of the arcs and typing the rotation angle. This will properly cut the mask and retrieve only the separated part, which can be extracted as a mesh through button Surface from Mask. 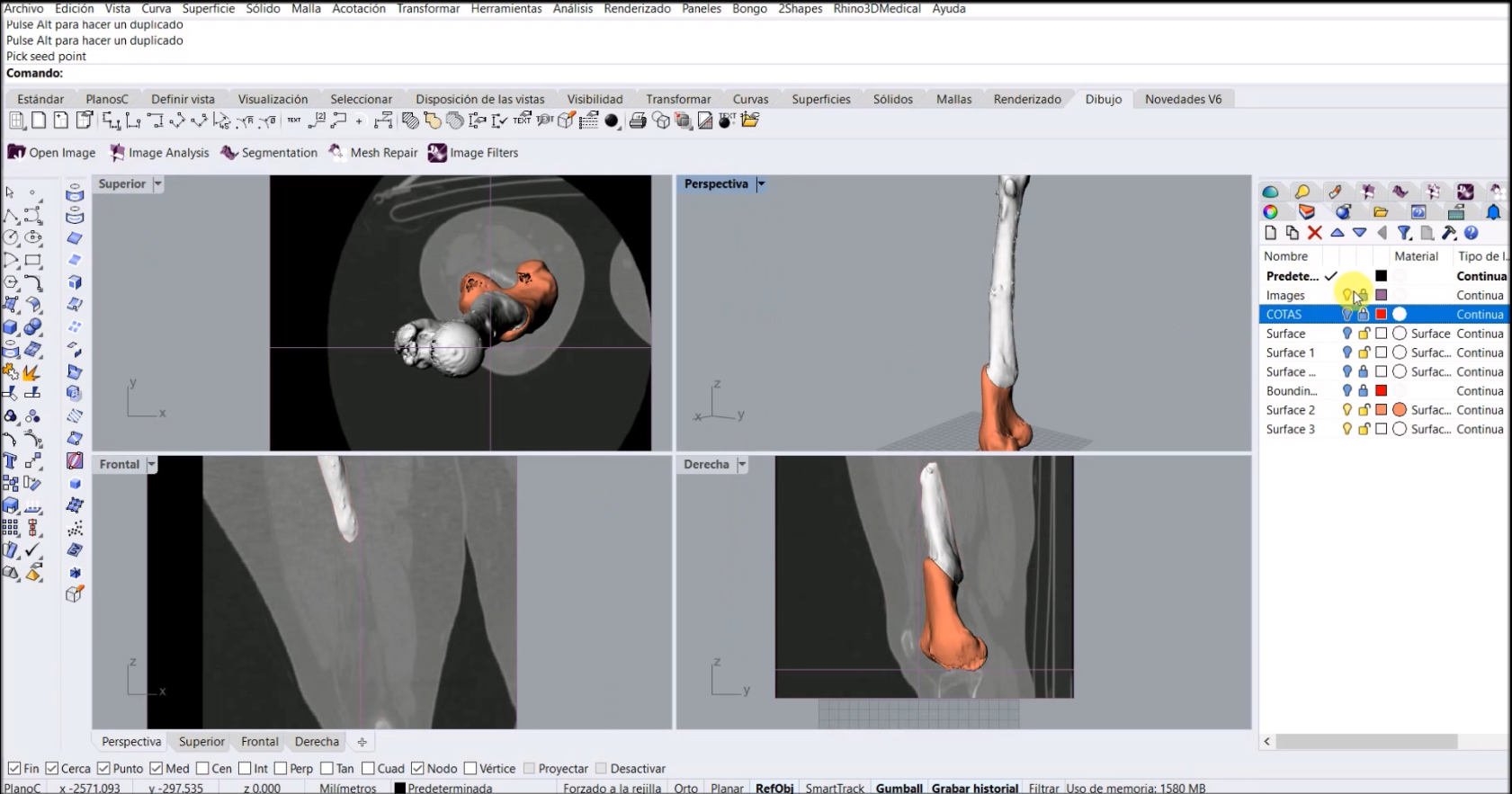 Meshing the whole femur and the separated part.

Once we have the femur models, we outline the angles of the osteotomy for presentation and planning. For this, we use line geometries and angle annotations. Create lines following the axis of the femur and the deviation of the end of the femur, and annotate the angle between them. Use command Line to create the lines, and command DimAngle to create the angle annotations between these lines. These commands are found in Drafting tab in Rhino. 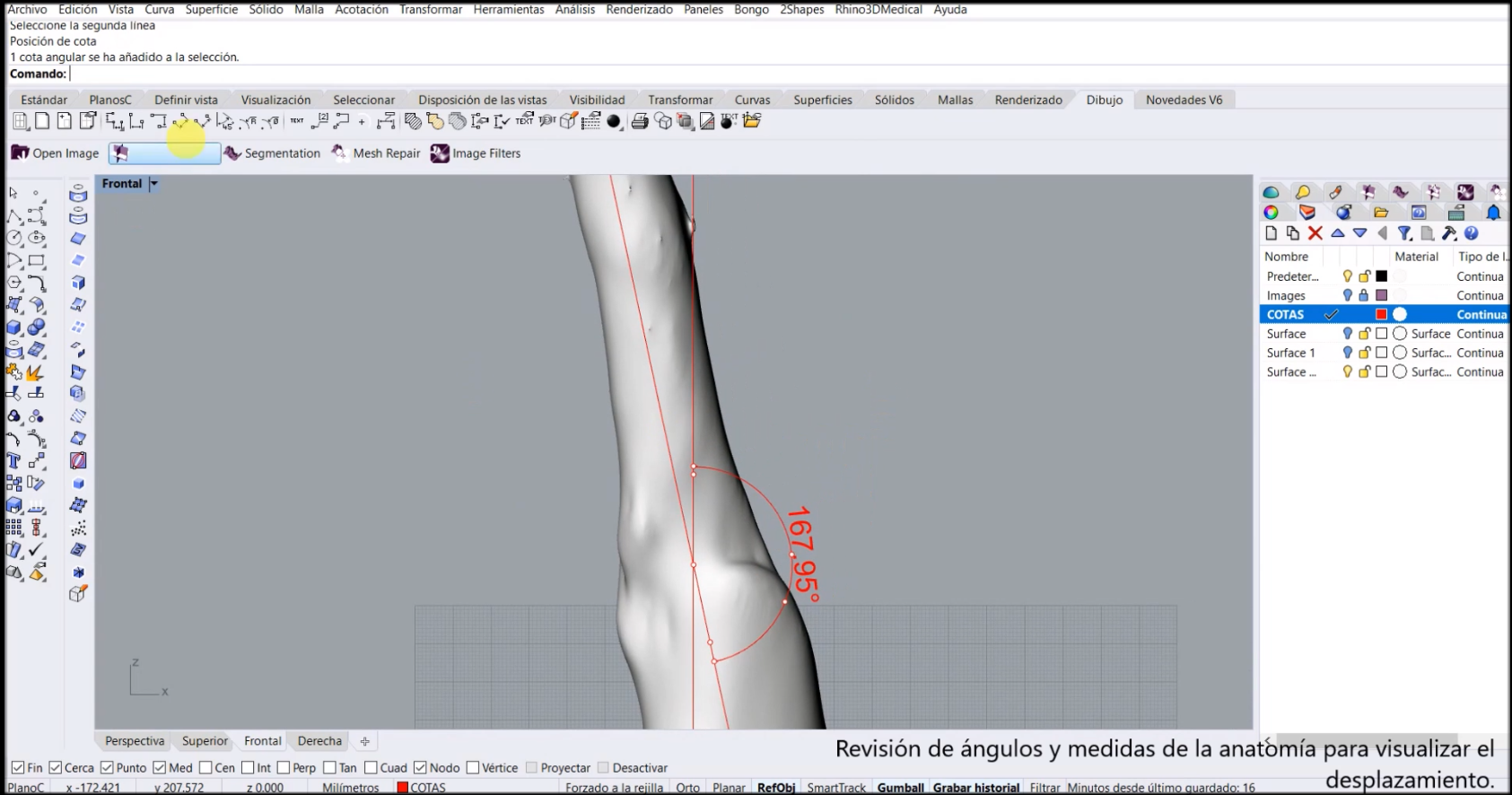 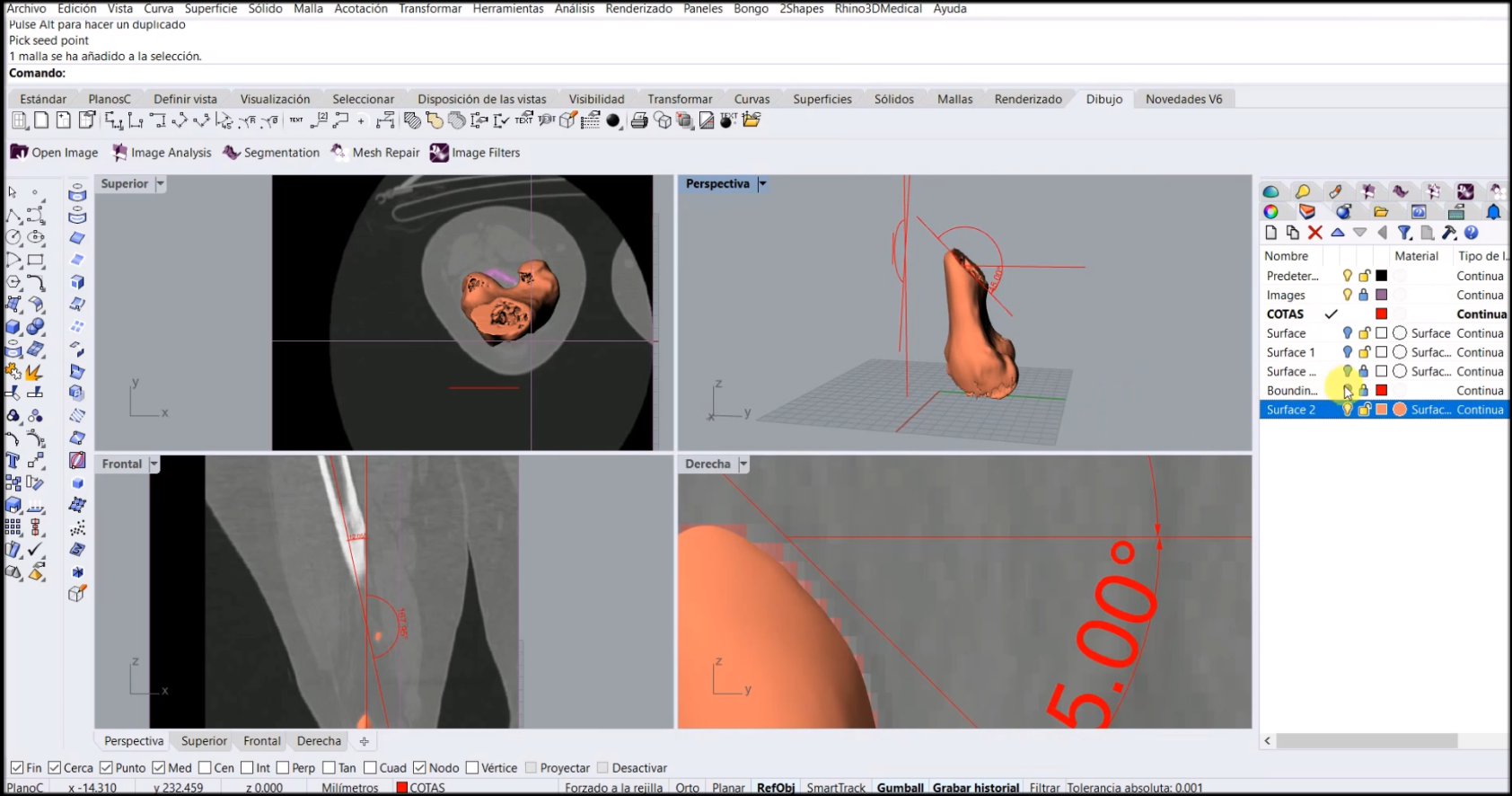 Once set the annotations, rotate the end of the femur with respect to the main axis (with the gumball as before) to see how the osteotomy correction would look like and plan the case, as in the following pictures. 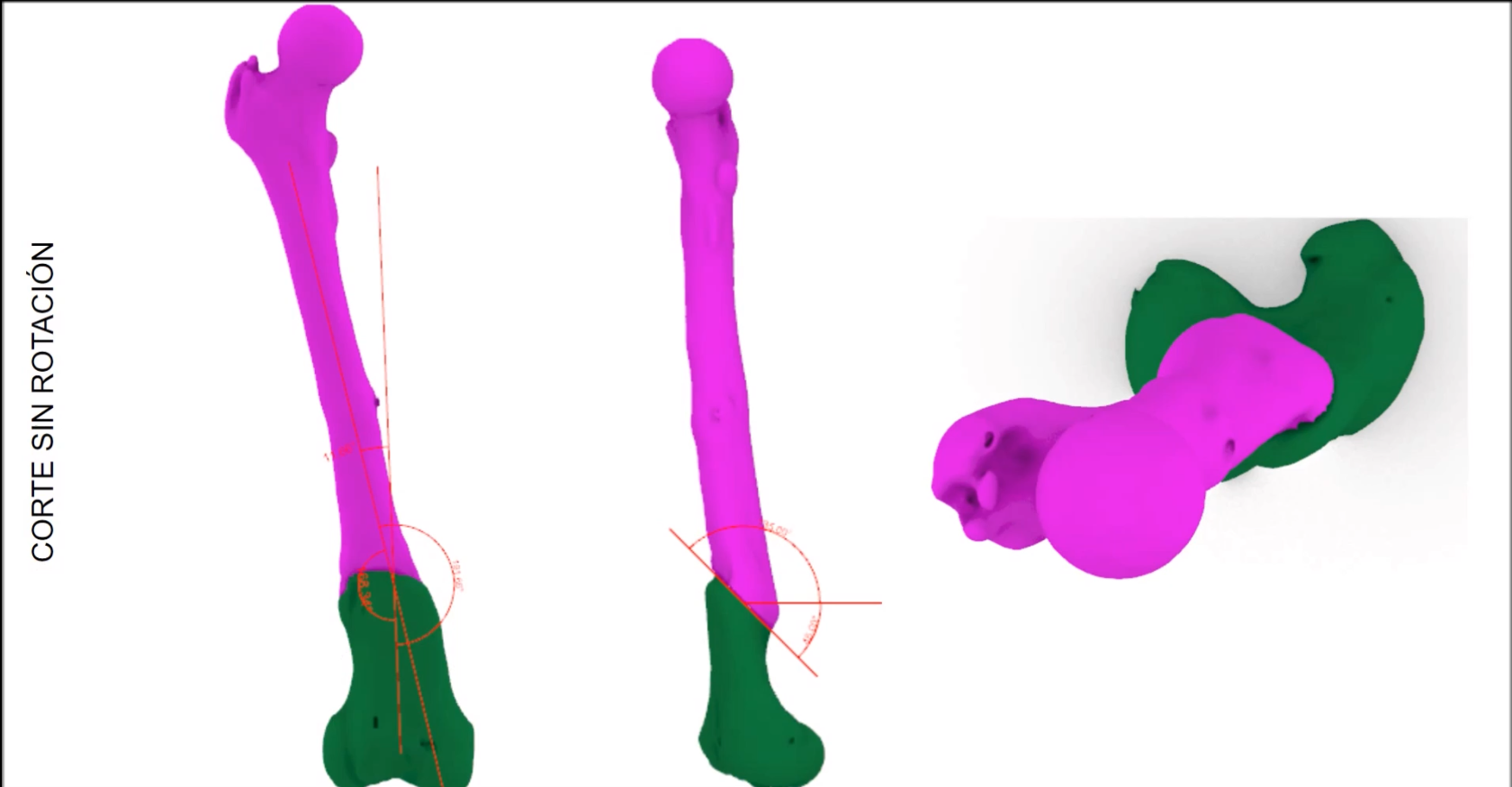 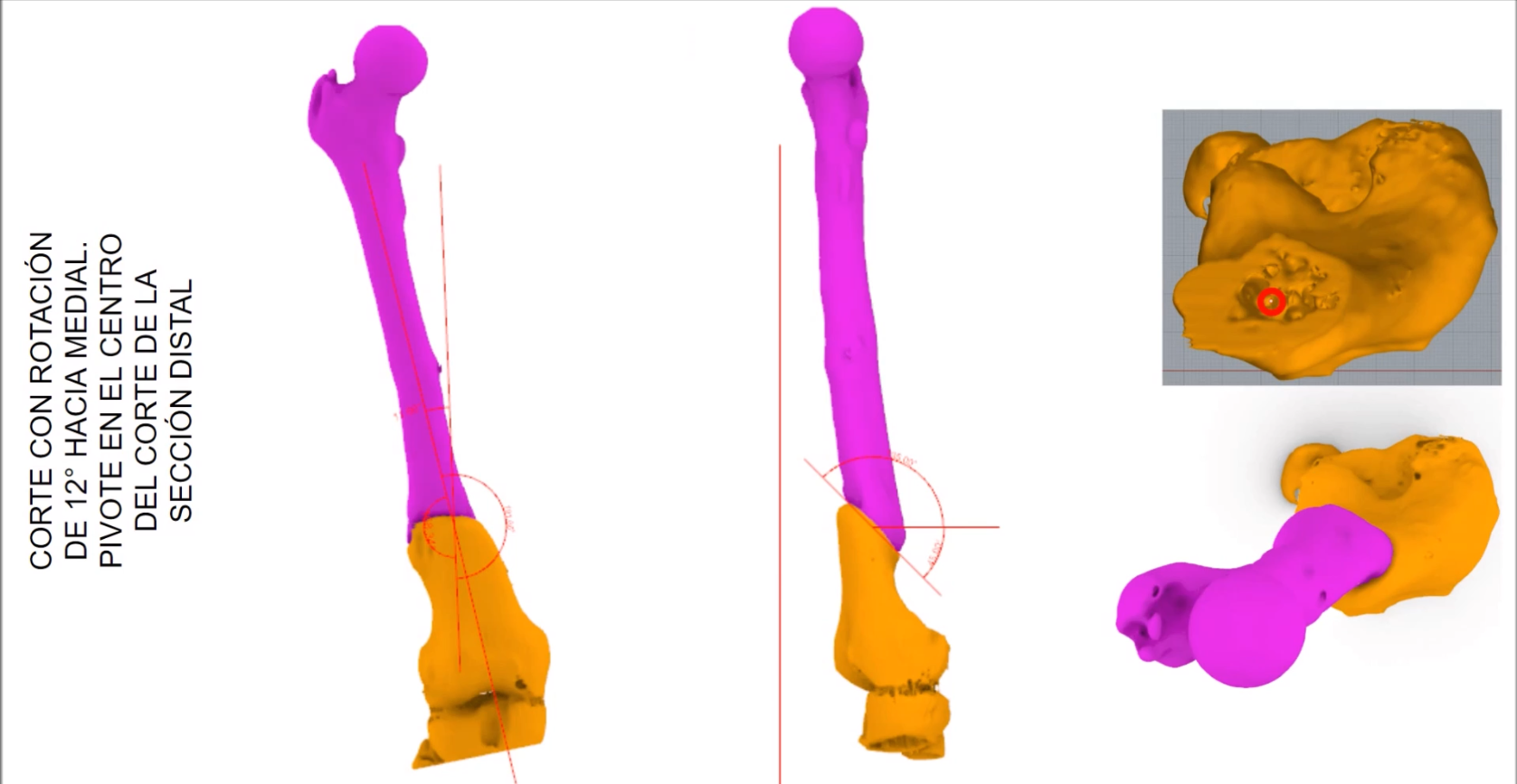 Eventually, export the meshes as STL objects to be 3D printed, via command RMExportMeshToSTL, to perform the planning with actual 3D prints. 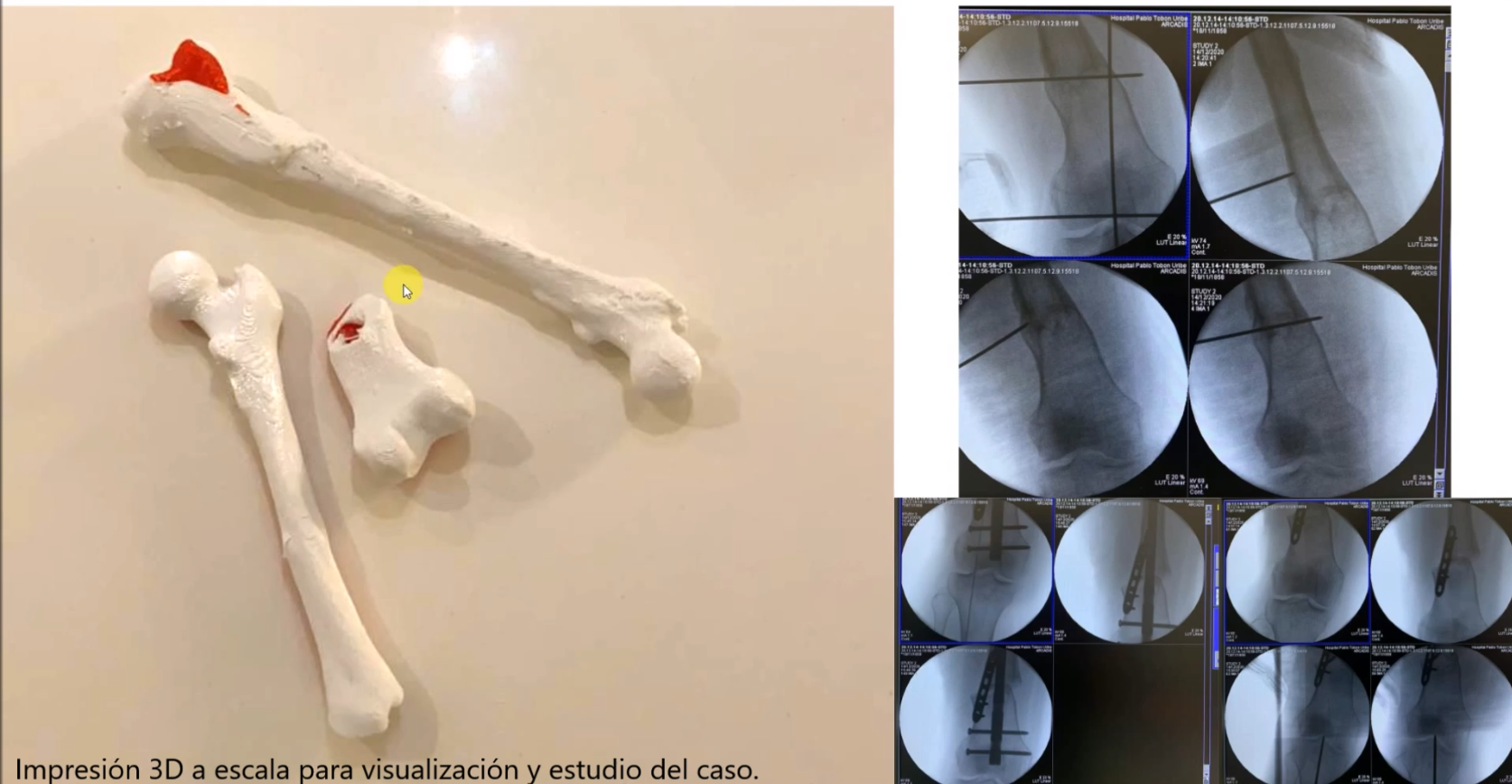 Watch in the following two videos the full workflow, in a broader context presenting Rhino3DMedical and Rhino3DColombia in general. The videos are in Spanish.

Thanks to Valeria Palacio Manco, industrial designer at Rhino3DColombia for proposing and preparing the workflow, and to Dr Camilo Andrés Hernández Gallego at Antioquia University Hospital in Medellín, Colombia, for planning and supervising the case.